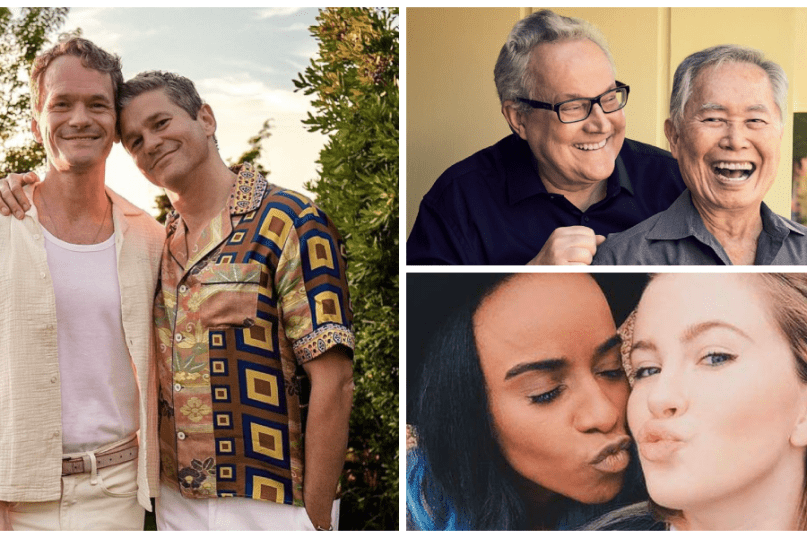 Celebrities’ romantic relationships are often a hot topic on social media and in our daily lives. Moreover, there are so many couples that we are unaware of — particularly couples that are members of the LQBTQ+ community. We all know and love celebrities like Ellen, Elton John, and Cara Delevingne, but we don’t usually follow the news on their latest love interests or partners. Let’s find out today about these amazing couples that most people don’t know about.

We’re starting this list with a bit of controversy to keep you on your toes. Elliot Page was married to dancer Emma Portner, but the couple filed for divorce in 2020 after a 3-year-long marriage. Page is now rumored to be dating Mae Martin after they debuted on a red carpet together. We’re happy as long as the Umbrella Academy star is happy, but we can’t say we didn’t wish Page and Porter would give it another shot.

Elton John has been in the limelight for as long as we can remember. However, not many of us know he has a husband. John and Furnish met through a mutual friend, and 19 years later, they are happily married with two children. We’re glad that Elton’s husband still chose to love him after discovering his original name was Reginald Kenneth Dwight.

Some actors find it difficult to find a partner within the celebrity community. Sometimes the answer is to look for someone who isn’t famous. Actors can take a page from Wong’s book as he found love at a singles’ event. Wong and Schnorr tied the knot in 2018 after being together for eight years. We’re not sure who proposed, but we’re betting that Wong couldn’t wait to marry Schnorr for his charm, wit, and mustache. How great is that mustache, by the way?

Jim Parsons, The Big Bang Theory star, and producer, Todd Spiewak, have been together for 20 years. We do not doubt that their relationship started with a big bang when they were introduced via friends in 2002. Although we all thought Sheldon and Amy would last forever, we are so glad that Parsons found his true love. We know that they will continue to inspire millions of people.

They should create a new spin-off of How I Met Your Mother for the next couple of years. They should change it to How I Met Your Father because we know you’re all curious about how this cute couple came about. We have the story of beloved actor Neil Patrick Harris. Harris and Burtka have been happily married since 2014 and have two children. As if their family wasn’t perfect enough, they also have an incredible sense of humor. If you have yet to see their Olsen twin’s costume from Heidi Klum’s 2019 Halloween party, we suggest you Google it right now.

What is better than one sweet old lady? Two sweet old ladies. And what could top that? The ladies are married to each other. That’s double the number of grandmothers, which means double the number of sweets, hugs, and kisses. The pair have been together for over fifty years and have worked creatively on several projects. They chose not to have children and couldn’t be happier with the decision.

This Twilight star has undergone heavy media scrutiny in her lifetime. She had previously dated her Twilight costar until photos of her kissing a married director emerged. But with all the drama finally behind her, she has found love in Dylan Meyer. Stewart and Meyer’s engagement was revealed in 2021, and Meyer was the one who popped the question. This may be off-topic, but did anyone else notice that Dylan shares her surname with the writer of Twilight, Stephanie Meyer? This proves their relationship was fated to be.

Haynes and Leatham’s relationship is perhaps the shortest on this list so far. The two announced their engagement in 2017 and divorced only six months after getting married. They both signed a confidentiality agreement, so we can never be sure why their marriage was so short-lived. Haynes revealed that he was struggling with drug addiction, and this may have been the reason for the divorce. Things went from bad to worse when his mom died during the divorce process. We wish the Arrow actor the best and hope he heals from these upsetting events.

Smith and Ashe had a long and rocky road to get to where they are today. Smith opened up about his sexuality when he announced that he was dating Ashe in 2020. Unfortunately, the pair broke up less than a year later. They didn’t stray too far away, though. Smith and Ashe, or “Sashe,” got back together in 2022. We’re so glad they decided to give it another shot, otherwise, we wouldn’t have seen their remarkable appearance in the Calvin Klein Pride Campaign.