Bizarre Photos That Will Play Tricks On Your Mind! 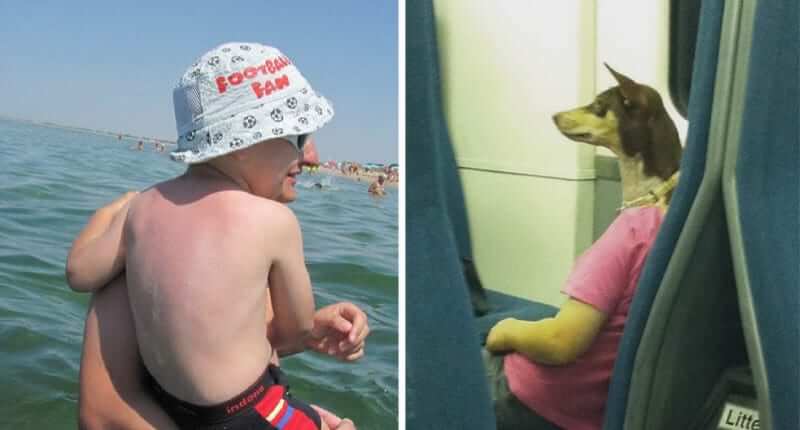 Once in a while, we have to do a double-take when looking at some interesting pictures. Due to their weird angle, your brain will need a minute or two to identify what the photo actually was. Here are some of the most bizarre images on the internet with the tricky angles that will fool anyone. Let’s take a look!

Is this a Real-life Centaur?

At first glance, many will wonder that is that creature? If you only see it briefly, it’s not easy to spot her legs when her coat covers everything.

Or you can believe that she’s a centaur, easy as that. Let’s move on to the next optical illusion.

This Puppy Has Two Heads

We have read about a three-headed dog in many tales and laugh it off like the usual joke when someone mentions about one.

This dog with two heads will surprise you, looks how cute the puppy is.

Two cars in one

At first glance, will you think that this is just one car with a unique design? Many will try to argue, and you will be surprised when listening to the correct option.

These are actually two separate vehicles. However, the woman is just a part of the van’s design. With the weird angle, it looks like she is driving the convertible.

That’s a nice pair of legs

This picture had caused quite a stir when it first appeared on the internet. We have to comment on his very long legs and such short pants.

Nevertheless, let’s take a second look. That could be his girlfriend, who has her head hidden by his shoulder.

Imagine you are in your car, and a giant baboon suddenly appears and begins to attack you. How scary is that?

With its massive form, the baboon could pick you up and throw the car around like a toy. Luckily it was just an illusion.

Cat piles are adorable, but perhaps not this one. Is this one cat in the middle of doing a split, or two cats that morphed together?

Do all cats have the magical abilities we suspect? How do they sit perfectly to form such an image?

Move aside, magic flying carpets. It’s time for an upgrade floating stage to rule the day.

We are all confused when looking at this photo. The flag’s shadow line up perfectly and makes it look like she’s flying.

How high is this man to possess such long legs? Moreover, where does he gets his pants?

If his legs are hanging off the bench, that must have been uncomfortable. Perhaps moving to sit on the grass will help?!

This Baby and his Massive Feet

Is this the above man’s son? The baby must have the largest feet we have seen on anyone at his age.

We couldn’t imagine him walking with these feet. Is there any pair of shoes that can fit him?

When talking about evolvement, it looks like this fish has reached that stage.

Its human-like arm is now a dangerous prey, as it can just use the new arms to catch other underwater animals.

Did the Guinness Book of World Records organization have her name on the list? Because it looks like no one can compare with her impressive arm length.

She manages to reach three kids on each side, which is impressive. This is another example of a perfect alignment angle when taking a photo.

Once in a while, we could meet someone with a t-rex arms problem. However, this guy has the opposite situation.

His giant head body makes his head look super tiny. We wonder if he could find any hat that can fit?

Walking on water is history

You have heard stories about men walking on water, but how about lying on the water surface?

This guy managed to levitate gracefully. Kudos to whoever takes the shot because he could sink at any moment.

You have seen the massive baboon above; here’s his friend! The ordinary size seagull is already scary, but imagine a giant one?

It could crush this man in an instant. The image reminds us of a famous Alfred Hitchcock movie, The Birds​ , a lot.

We have shown you some photos when a human looks their age, but this person takes the cake.

Is this another case of Benjamin Button syndrome, but only his body is reverse aging?

Who is Lifting who?

Many would argue who is the one lifting who in this photo. Is this the woman in the middle, or the one on the right?

Their outfits blend perfectly, providing a tricky photo and making it hard to detect. We’re going with the women in the middle, how about you?