Unusual Photos We Couldn’t Believe Are Not Photoshopped! 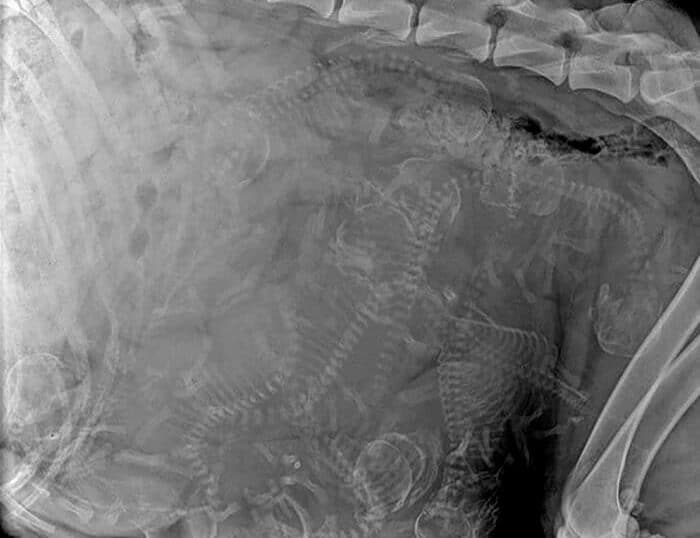 Once in a while, we briefly see an image online but then have to do a double-take to see if it’s real or not. Here is our list of the most unusual photos we think could be photoshopped at first glance. It could be a coincidence, weird angles, or perhaps some paranormal activities. Overall, you will feel amazed and mortified at the same time.

At first glance, many will say this is a photoshopped picture. We couldn’t see where the water ends; it looks like an infinity pool. The place is Nemo 33 – an indoor pool located in Brussels.

It is 33 meters (108 feet) deep and has the title of The Deepest Indoor Pool on record. If you don’t fear extreme water depths, plan a trip and try it out.

What do you think when you first look at this photo? We could mistake those black specks for some spiders that got fossilized after a long time. However, the truth is far from it.

There is no ‘spiders infested’ situation here. From what we learnt, the rock has ‘Mannardite phantoms,’ which cause the black spots to appear inside these kinds of quartz. Beautiful, but creepy nevertheless!

Looking at the photo, we don’t know how something like this could happen. Does it look like a bunch of alien eggs that we often see in many sci-fi movies?

However, take a closer look, and the whole cabbages field will appear. The only question remains is that what happened to them? Did anyone forget that they have grown a whole bunch and let them rot away?

Plants can also be creepy, especially in this case. This pomegranate reminds us about the creepy jack-o’-lantern that only surfaces when Halloween arrives.

Its white seeds weirdly line up in such a weird order representing human teeth. Would you look at any pomegranate the same way again after this image?

If you’re someone who prefers a good shadow puppets trick, perhaps this will come in handy. While you don’t create them by hand, everyone will be amazed or speechless.

Nevertheless, make sure you don’t show it to little kids. They might be a nightmare to forget, as the image could be quite disturbing. Another interesting part of this photo is that they look too ‘real’ with all the details.

If you are a big fan of unusual architectural buildings, add the Taihang Mountains of China to your travel bucket list. The 300-feet spiraling steps will make an exciting adventure for those who are brave enough.

Why would anyone build such a crazy-looking structure, we wonder. The stairs just run endlessly, and it doesn’t seem safe either. There are only small bars that connect to the mountain.

The Sea could be your Worst Nightmare!

Have you ever heard of the biblical story of a man who was swallowed alive by a whale? It could be more realistic than you think. The boat looks even smaller when it sails in the dark grayish-green ocean in this image.

The massive whale swimming just below the water captures our attention the most. While it could be harmless, the sheer size will terrify anyone who dares come closer. A swift of its tail could take down the boat quickly.

We have come across many stories about mermaids, haven’t we? Many could argue about its existence for days. However, one of the things we could agree on is that the traditional mermaid sure looks like this beluga whale.

Thes creature looks magnificent with its human-like legs, which many could mistake for mermaids. Perhaps someone has seen a few beluga whales and made up the story about a magical being in the Sea. What do you think?

Many people dub winter the magic season, with all the beautiful snow and icicles creating magnificent views. Your first instinct would be to rust out and make snowman or snow angels whenever the snow falls, wouldn’t you?

However, be careful of this icicle’s ghost that could be lurking at the corner. Imagine seeing this at night! Not only did it have a creepy shape, but the yellowish-brown color also makes a disturbing combo.

Is this an actual animal we are seeing? Not just a 3D image or a super realistic painting? This is a 100 percent actual image of a harpy eagle. Moreover, it is also the largest eagle in the world.

The creature makes a magnificent view with a massive wingspan of over 7 feet. It also looks threatening at first due to its regal and human-like eyes.

If there is no title, people will immediately raise many questions when they see this photo. How come countless small skeletons appeared within one body?

This is why context is essential. While it looks incredible, this is an everyday occurrence. The whole x-ray might make it look creepy at first, but the puppies are safe and sound.

When the Birds Covered the Sky

These scenes usually appear in many thriller movies, like The Birds (1960s). At one point, all people can see when they look up to the sky in Rome is a blanket of blackbirds.

From afar, they remind us a lot of a mosquito infestation. People were quick to find shelter in their cars. While one bird flying is normal, can you imagine a massive block of them swarming around? Scary!