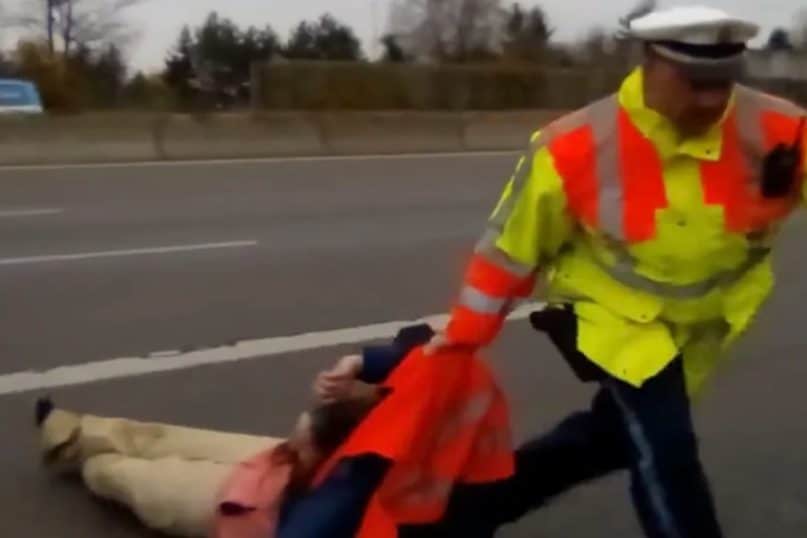 This police officer pulled a climate activist off the highway. A 30-second video of the action was filmed by the protest group Letzte Generation and then posted on Twitter.

In the video, he pulled a woman in a high-visibility safety vest, preventing her from blocking the three-lane A9 highway near the Allianz Arena.

As she was sitting on the street, a police car with blue lights stopped a few meters in front of the activist. The passenger door flew open, and a uniformed policeman entered and rushed toward the blocker.

Without hesitating, the Freising highway patrol officer pulls the woman onto the emergency lane by the collar of her jacket.

“Get behind the guardrail, or you’ll get it,” the officer shouts at the activist. However, the chaotic woman got up again and tried to sit on the highway again. The highway patrolman quickly ran up to her and pushed her back.

“Make sure you get over the guard rails,” the policeman demanded in the most excellent Bavarian dialect. And more emphatically: “Get behind the guardrail. That’s a police order”.

The video ended here and has received thousands of shares on social media in no time.

Note: The travel lane to Munich was already closed earlier due to protesters sitting on a gantry on the A9 autobahn. Nevertheless, sitting on the highway is a dangerous approach.

Even on a closed highway, emergency vehicles, fire departments, and the police will need to pass through in case of emergency. As a result, sitting on the road for any reason is prohibited.

If someone then sits on the roadway, it will become a danger!